Who is Barun Biswas ? 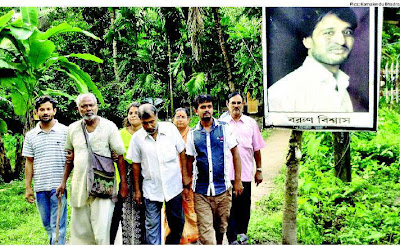 10 years ago, in a sleepy village named Sutia , near Calcutta,  in the State of  West Bengal,  in the Eastern part of India, on a rainy July morning, some people had huddled together distributing pamplets. They had come together to protest against the spate of crimes in Sutia. They talked in hushed voices , with a despondent look on their faces. People passed by with their umbrellas , not paying heed to their meek voices- afraid ... .  Suddenly, a young man in his late twenties, walked up proudly and spoke on the mike. His voice was fearlessly bold and calm. " If we cannot take care of our mothers and sisters , we do not deserve to live in  a civilized society.  It is better to be dead than living in constant fear. Come, let us join hands and protect the honour of  the women ".  This young, bold, courageous gentleman was Barun Biswas.  He sparked the fire of  the movement against atrocities  in the "Rape Village " - the unofficial name given to Sutia.

A gang of politically powerful goons , led by a miscreant named Sushanta Chowdhury , prowled the Sutia area. They extorted the people and used gang rapes as a means to silence the protests. Anyone who protested or wanted to go to the police were silenced by the gang by raping the females of the family, in front of their eyes. By official numbers, there were about 40-45 rapes in two years , a dozen or more murders , but the actual numbers were much more. Barun spearheaded the formation of a group named Pratibadi Mancha, who helped the families garner courage and the first FIRs against rape were registered.  He helped the rape victims get married.  Slowly, many people joined the movement and the Government was almost forced to take notice.  Finally , Sushanta Chowdhury was arrested and is currently serving in jail.

On July 5th, 2012, after alighting from the suburban local train at Gobardanga Station , he was gunned down by some unidentified youth.  It is being suspected that Sushanta Chowdhury had masterminded the killing from jail.

But, his fight for peace and justice lives on. The threat remains but the fear is gone .  In the houses of Sutia, the garlanded photograph of Barun Biswas is kept beside the idols of the gods and goddesses.

Barun Biswas was made of steel.  The son of a poor landless farmer, he had this passionate streak of helping others.  Even in school, he was never afraid of speaking up - even against his teachers , if the need be. He was scared of no one and  helped the needy at the cost of his own comfort. There were numerous needy students who he had helped and given shelter - offered them his own bed while he slept on a plastic sheet.  He bought medicines for the poor and elderly,  gave free coaching to bright students seeking jobs. He had submitted a plan for dredging a canal to prevent flooding of Sutia and nearby villages.  Recently this plan has been passed by the government.  He had passed the state civil services examination , but he wanted to stay in his village and, so he took up the job of a school teacher in Sutia. And he enjoyed it. It gave him so much more time for social service.  "Nothing pleased him more than helping people. He did it passionately, out of genuine love for the people," said Arun Biswas, his brother.

"If killing Barun was meant to gag the voice of protest, hundreds of Baruns will emerge . He will live through our work" - the villagers say. He is their Guardian Angel.

Barun , you will not be forgotten.

On 5th July, 2012, as you lay on the station platform, crying for help, with bullets riddled in your body , no one came forward to help you.  Forgive us Barun !

Your dog Bholu, still sits on the steps of your house, waiting for his master to return.

We too are waiting for you, Barun... through thousands of common people in the world who will protest whenever they see injustice....

Your Leadership has sown the seeds of many many leaders in Sutia village , who are taking your cause forward .