How you react to the above sentence tells a lot about your leadership style. 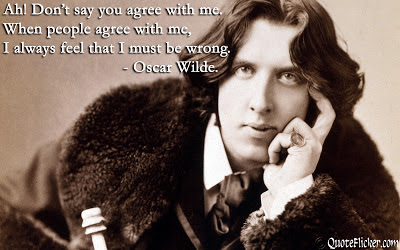 Let me give you an example.  In one of my teams, whenever I was about to sign off on a meeting after making some decision, this person in my team raised his hand and said "I don't agree with you ... have you thought about this aspect ? " , and then he usually went on to give a very different perspective.  Let me confess, sometimes it was really very frustrating.  At the face of it,  it seemed that he was forever contradicting me , but when I got used to his style, I realized how valuable this person was , and how lucky I was to have him in my team.

When you are in a position of authority, it is very easy for people in your team to agree with whatever you decide. There are very few people who think without any bias and speak out fearlessly. As leaders, we should cultivate this atmosphere of openness where everybody thinks independently and creatively. In my own experience, I have found that these contradictory thoughts have made my mind and thoughts proliferate and my perspective became broader.  Not only in technical decisions but this helps in any decision making.

But sadly,  I have seen many situations where the dissenting voice gets stifled when it is not well received.  It is sad since many good ideas or mediocre decisions cannot really reach the level of excellence because of lack of open discussions and contradictory opinions.

It really depends upon the leadership style how we can utilize a person saying "I don't  agree "  by listening to him.  And if his point of view  is valid, give a real and honest thought to it and if it makes sense, amend your decision without letting your ego coming in between !  Again , if  after giving him your ears, you think that his opinion is not valid for the situation,  thank him for voicing his thoughts but go ahead what your original decision was.

This shows the leader's humility and integrity . And it earns respect !

So , the next time when you hear "I don't agree", welcome the three words and thank your lucky stars that you have a voice in your team who will help you grow even further !
Posted by Ananya at 10:11